(11) Narrow streets with people walking in the road

Tokyo is incredibly pedestrian-friendly, yet sidewalks occupy only a fraction of the roads.

The vast majority of smaller roads in Tokyo do not have sidewalks. These streets are narrow, which makes fast driving difficult. As a result, cars are well-behaved and people are free to walk in the middle of the road, moving over casually as vehicles approach. Here’s a typical scene from Kiyosumi, Koto-ku, Tokyo:

A child rides a miniature car on a narrow Tokyo street. 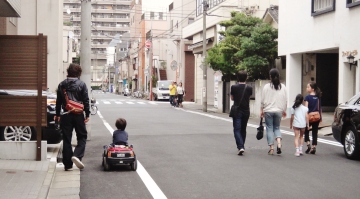 A child rides a miniature car on a narrow Tokyo street, next to a family of four.

The benefit of narrow streets is described by the respected American blog, Strong Towns:

“Very few vehicles use local streets, and the ones that do drive slow and cautiously – similar to navigating a parking lot. Because it’s safe, there’s little need to segregate the different users of the street (pedestrians, cyclists, motorists.) If you drive, you spend most of your time on the arterial streets. If you walk, you can spend most of your time navigating the local streets in an environment that feels very natural to a human (you’re not dedicating a large chunk of it exclusively to the automobile.)” – SOME THOUGHTS ON NARROW STREETS, March, 2015

Tokyo’s narrow streets were also the subject of a study, presented to the Canadian Institute of Traffic Engineer, that compares traffic data in Toronto and Tokyo. The report showed that (narrow) 10-foot lanes are safer than wider road options (while still handling the same amount of traffic for both cars and large vehicles. A 2015 article from Better Cities & Towns notes:

“Narrower lanes reduce vehicle speed, which has a big impact on fatalities in urban places. The average speed at collision in Toronto, with wider lanes, is 34 percent higher. That is likely to result in accidents of much greater severity. Although accidents appear to go up with lane widths narrower than 10 feet, these accidents are also likely to be less severe. Tokyo has a lot of streets that are narrower than those deemed “safest,” yet that city has by far the safest roads while maintaining the highest capacity.” – Over-wide streets? You may regret it, Better Cities & Towns, August 7, 2015

The article includes the “curve of death”, which shows that pedestrian fatalities increase significantly when impact speed rises above 20-25 mph (32-40 km/hour).

Tokyo’s (generally) pedestrian-first culture can be illustrated by the ubiquitous Tobidashi とびだし / 飛び出し signs, which warn drivers of children in the area. (tobidashi means “jumping out” or “popping out”.)